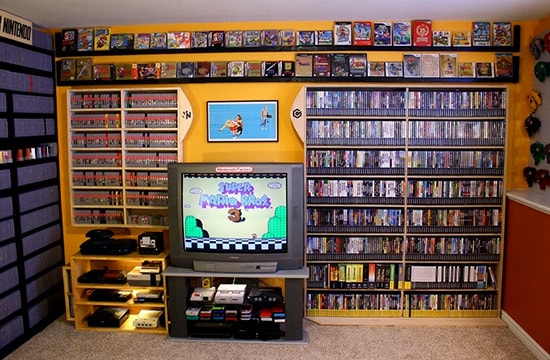 What is a Video Game Console?

Video Game Consoles: are devices that output a video signal or visual image to display a video game that one or more people can play. In other words, these are machines primarily designed for consumers to use for playing video games at home (in contrast to arcade machines or home computers).

While arcade machines are large, expensive to make and were designed to play games outside for money, home computers were designed for variety of purposes – such as bookkeeping, accessing the internet, storing and managing files or data, creating visual, textual or audio content and much more.

Video game consoles, on the other hand, were designed to be affordable, usable at home and for playing video games only.

To make the list easier to follow, some of the less known consoles have been removed from the following list. If you are looking for the complete list – check the next list below! You can use search box to filter results further, or use the arrow buttons to reorder the list!

This is the complete list of consoles, featuring consoles in chronological order starting from the very first console ever released (only pong “clone” consoles have placed on single row). If you find something missing from the list, please let us know in comments below! 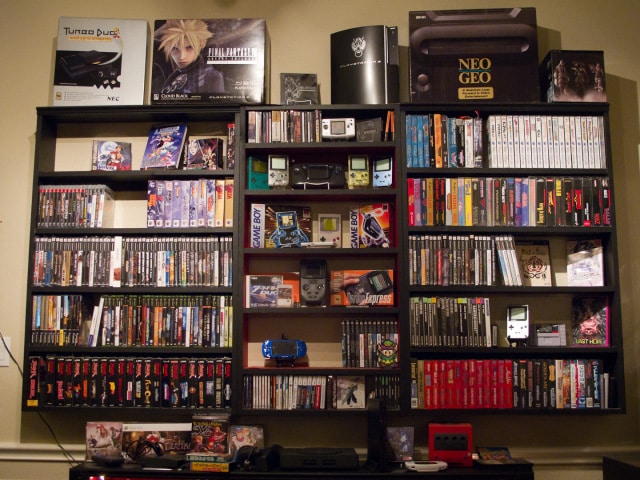 Best Retro Consoles of All Time

This list was composed in compliance with various lists (20 Best Gaming Consoles, Best Game Systems – Ranked by Gamers, Best Selling Game Consoles and others). It is based on serious research and includes following aspects: Impact to gaming industry, graphical and technological innovations. Sales numbers and popularity are also taken into account.

Not happy with the list? You can also Vote for Your Own Favorite Video Game Consoles! (You can choose more than one)

The image below is not complete as it is not including all the lesser known consoles and add-ons. However it is still pretty decent overview of the history. 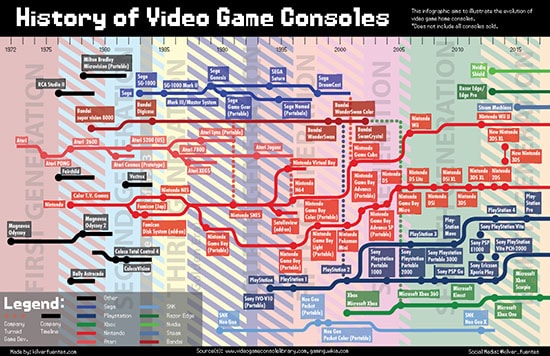 Magnavox Odyssey, released in 1972, was the first video game console ever. By today’s standards, the graphics are primitive. It is capable of displaying three square dots on the screen in monochrome black and white, with differing behavior for the dots depending on the game played. It does not have any sound either.

However, Magnavox Odyssey itself was based on another console called “Brown Box”, created between 1967-1969. Brown Box, invented by Ralph Baer, Bill Harrison and Bill Rusch, was a prototype for the first multiplayer, multiprogram video game system. Source: Here

The first generation of video game consoles lasted approximately 12 years. There were hundreds of home video game consoles released during that time. However, most of the consoles released were Pong variations. Most notable releases were: Odyssey series (eight dedicated Odyssey consoles from 1975 to 1978), TV Tennis Electrotennis and Atari Home Pong (1975) and Coleco Telstar series (14 dedicated consoles from 1976 to 1978). List of first generation consoles: Here

Fairchild Channel F was the first of second generation consoles released (in 1976). It was the first programmable ROM cartridge–based video game console, and the first console to use a microprocessor. However, Channel F was not a commercial success (mostly because of Atari VCS / 2600 released the next year).

Atari VCS (later named as Atari 2600) was released in 1977 and became the most dominant console of the era. At launch, the unit was originally priced at US$199 ($823 adjusted for inflation), and shipped with two joysticks and a Combat cartridge. It has wood printed panels, designed to look like a piece of furniture. 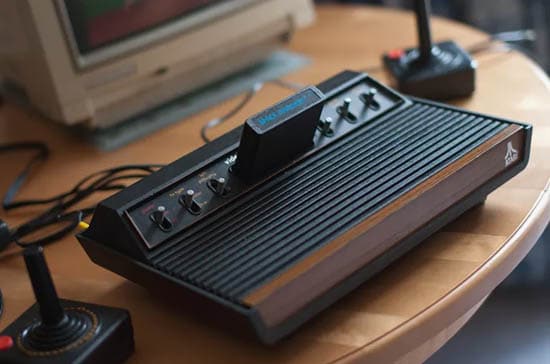 Activision, formed by four former Atari VCS programmers, started developing third-party games to be used on cartridge systems (such as the Atari VCS) in 1979. First, Atari attempted to block the sale of the Activision cartridges, but lost in court, allowing other third-party VCS game developers to flourish.

One such developer was Rob Fulop, who had created the VCS version of Missile Command. More than two million copies of Missile Command were sold. However, Atari only rewarded him with a gift certificate for a free turkey. Fulop promptly left Atari and co-founded Imagic. His first game for the company, Demon Attack, became a hit in 1982.

Other VCS-focused game development companies that sprang up in the early 1980s include US Games, Telesys, Games by Apollo, Data Age, Zimag, Mystique and CommaVid.

Hey! Don’t forget to Vote for Your Own Favorite Video Game Consoles! (You can choose more than one)

Below you can find list of consoles released (will be updated to be complete on day) in chronological order starting from earliest home console – Magnavox Odyssey.

Get Paid for Blog