RCA Studio II: is a home video game console made by RCA that debuted in January 1977. The graphics of Studio II games were black and white and resembled those of earlier Pong consoles and their clones. The Studio II also did not have joysticks or similar game controllers but instead used two ten-button keypads that were built into the console itself. The console was capable of making simple beep sounds with slight variations in tone and length. The Studio II included five built-in games. 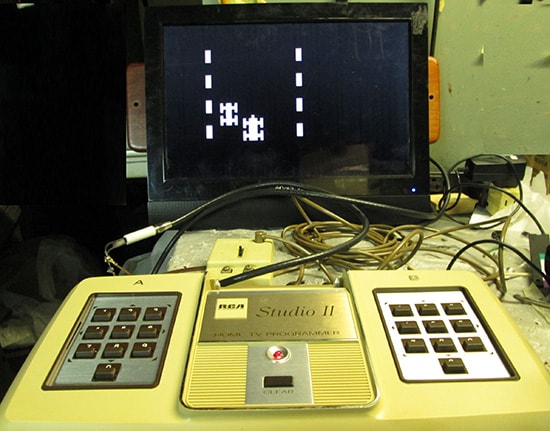 The Studio II was not a successful product; the previously released Fairchild Channel F made it obsolete at launch and the Atari 2600, superior to both, was released ten months later. After poor Christmas sales in 1977, RCA discontinued the Studio II.

Joyce Weisbecker, the daughter of the console’s designer, learned how to program her father’s homemade home computer as a child. After graduating from high school in 1976, she used her familiarity with the architecture to create School House I and Speedway/Tag for the Studio II, becoming the first woman to develop a commercial video game.

The Studio II sold poorly. An internal sales document put RCA’s own sales estimate for the console between 53,000-64,000 units sold between February 15, 1977 and January 31, 1978. It was released after the superior Fairchild Channel F, and the very successful Atari 2600 also appeared in 1977.

RCA announced the console’s discontinuation in February 1978 because of low Christmas sales. While losses were not disclosed, the company laid off 120 workers at its plant that produced the system in North Carolina. Some analysts blamed the fact the RCA Studio II’s games were in black and white, and could not compete with systems offering color.

The console was doomed from the start. The lack of a color display and control paddles made the unit old and dated. With only 11 retail games released, the Studio II suffered the same fate as Channel F – overshadowed and rendered obsolete by the Atari VCS / 2600.

A clone released in the UK called Sheen M1200. The Sheen M1200 was released in 1978, and produced PAL color with RCA Studio II games. Japan also made a color producing clone called the VISICOM Video Computer System. The lack of color on the RCA Studio II proves that the system was rushed to the market. Either that or RCA was looking for a cheaper way to manufacture the consoles.