Taito released Western Gun, the first video game to depict human-to-human combat. Game was designed by Tomohiro Nishikado, it had two distinct joystick controls per player, with one eight-way joystick for moving the computerized cowboy around on the screen and the other for changing the shooting direction. Midway released Gun Fight, an adaptation of Taito’s Western Gun, but this was the first microprocessor-based video game.

Please scroll down to vote for your favorite video games of 1975. Thanks!

Moria is a dungeon crawl style role-playing video game first developed for the PLATO system around 1975. Unlike other rpg games developed at the time, Moria is a first-person game in which the players navigate a series of wireframe mazes (shown in a tiny window) to slay enemies and collect treasure and was nonetheless unique as it wasn’t based on Dungeons & Dragons. It was a pioneering game, allowing parties of up to ten players to travel as a group and message each other, dynamically generating dungeons (instead of pre-computing them). A fun fact – non of the authors had read The Lord of the Rings and were not even aware of the existence of D&D when they began programming Moria, However, the game really does feel like something written by someone who had heard about D&D. In Moria, there were many innovations. It was the first rpg: 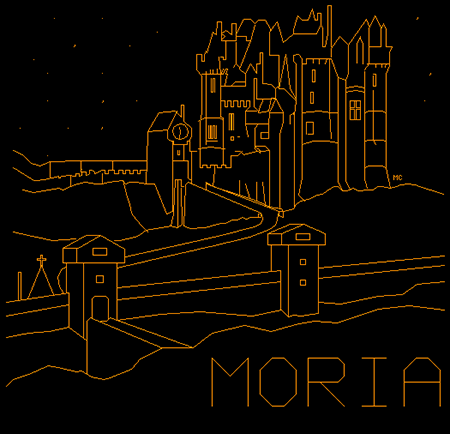