Vectrex Console: is a vector display-based home video game console that was developed by Western Technologies/Smith Engineering. It was licensed and distributed first by General Consumer Electronics (GCE), and then by Milton Bradley Company after its purchase of GCE.

It was released in November 1982 at a retail price of $199 ($500 adjusted for inflation) as Milton Bradley took over international marketing the price dropped back to $150, then reduced all the way to $100 shortly before the video game crash of 1983 and finally retailed at $49 after the crash. The Vectrex went off the console market in early 1984. 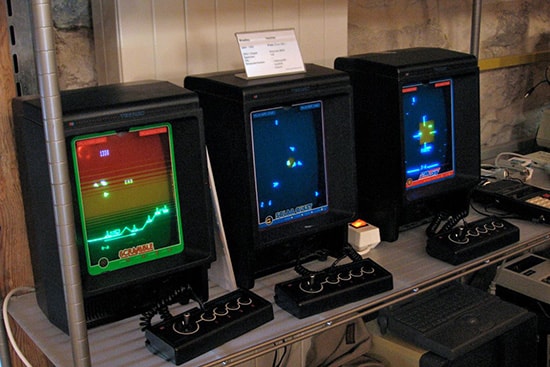 Unlike other non-portable video game consoles, which connected to televisions and rendered raster graphics, the Vectrex has an integrated vector monitor which displays vector graphics. The Vectrex is monochrome and uses plastic screen overlays to simulate color and various static graphics and decorations.

At the time, many of the most popular arcade games used vector displays, and through a licensing deal with Cinematronics, GCE was able to produce high-quality versions of arcade games such as Space Wars and Armor Attack.

Vectrex comes with a built-in game, Mine Storm. A light pen was also available, and in 1984 it became the first home system to offer a 3D peripheral (the Vectrex 3D Imager), predating the Master System’s SegaScope 3D by several years.

The Vectrex was conceived by John Ross of Smith Engineering in late 1980. He, Mike Purvis, Tom Sloper, and Steve Marking had gone to Electro-Mavin, a surplus warehouse in Los Angeles. They found a 1-inch cathode ray tube (CRT) and considered if a small electronic game could be made of this. A demonstration of a vector-drawing cathode ray tube display was made by connecting the deflection yoke in a standard television to the channels of a stereo amplifier fed with music program material.

An axillary yoke was used to keep the raster television’s horizontal fly-back high-voltage system running. The demo led to a system originally conceived as a handheld called the Mini Arcade, but as Smith Engineering shopped the idea around to developers, it evolved into a tabletop with nine-inch screen.

Prior to the Vectrex’s discontinuation, a successor console with a color screen had been planned. After the rights reverted to Smith Engineering, the company made plans to revive the Vectrex as a handheld, but the imminent arrival of Nintendo’s Game Boy put an end to those plans. In the mid-1990s, Jay Smith, then head of Smith Engineering, allowed new hardware and software development on a fee free / royalty free basis. Smith has also allowed duplication of the original Vectrex software on a not for profit basis in order to provide a method for Vectrex owners to obtain the original titles low cost or free.

Clean Sweep has a special edition called “Mr. Boston” that is the rarest Vectrex game. Mine Storm II was available only as a mail-order free item due to glitch in original game on lvl 13. Star Trek: The Motion Picture was called Star Ship in Europe and Harmagedon in Japan.