Besides the look of miniature Famicom, unsurprisingly it has all the functionality of previously released Nintendo Classic. It plugs into your TV via HDMI, which gives the crispiest of edges to all those 8-bit classics. It comes with 30 built in games, but unlike the western version, the miniature Famicom comes with two controllers. This makes it accurate to the original machine where the controllers sat on sides when not in use.

Another difference between the Nintendo Classic Mini Family Computer and the NES Classic Edition are the games. Apart from the obvious fact the Famicom games are in Japanese, there are a couple differences in 30 titles available on each machines.

Famicom Mini is available at Amazon

Special Edition? Yep! Nintendo released a gold and red Famicom Mini in Japan that comes preloaded with 20 games that are based on manga. This special edition of the Famicom Mini celebrates the 50th anniversary of the Weekly Shonen Jump magazine. Overseas fans will have to buy through eBay or get someone to ship it to them directly from Japan. 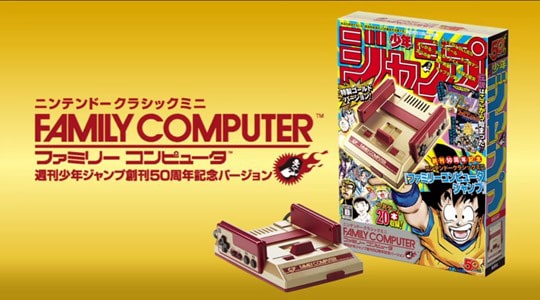 Following a series of arcade game successes in the early 1980s, Nintendo made plans to create a cartridge-based console called the Famicom, which is short for Family Computer. Masayuki Uemura designed the system. Original plans called for an advanced 16-bit system which would function as a full-fledged computer with a keyboard and floppy disk drive, but Nintendo president Hiroshi Yamauchi rejected this and instead decided to go for a cheaper, more conventional cartridge-based game console.

Oddly enough, it was released on the exact same day as Sega SG-1000.