Tempest Video Game: is a 1981 arcade video game by Atari, designed and programmed by Dave Theurer. The game takes place on a 3-dimensional surface, sometimes wrapped into a tube, which is viewed from one end and is divided into a dozen or more segments or lanes. You take a control of a claw-shaped spaceship called Blaster that crawls along the near edge of the playfield, moving from segment to segment.

Tempest was one of the first games to use Atari’s Color-QuadraScan vector display technology. It was also the first game to allow the player to choose their starting label. This feature increases the maximum starting level depending on the player’s performance in the previous game, essentially allowing the player to continue. Tempest was one of the first video games to sport a progressive level design in which the levels themselves varied rather than giving the player the same layout with increasing difficulty levels. 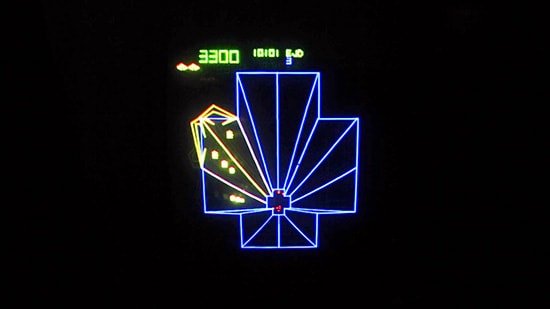 The objective of Tempest is to survive as long as possible and score as many points as possible by clearing the screen of enemies. Your ship can rapid-fire shots down the tunnel, destroying any enemies within the same segment. You are also equipped with a Superzapper, which destroys all the enemies currently on the screen.

Enemies in the game

When all enemies in a level are destroyed or reach the near end of the playfield, the player “warps” to the next level by traveling down the playfield. As the player warps to the next level, he or she must avoid or shoot away any spikes. The player loses a ship when an enemy comes into contact with their ship, shoots it or otherwise destroys it. Also if the ship hits a spike while warping. At certain point thresholds, the player earns a new ship. The game is over when the enemies destroy all of the player’s ships.

The game consists of sixteen screens with unique geometric shapes, some of which are closed tubes that allow the player to loop around, while others are open fields that have distinct left and right endpoints. When all sixteen screens have been played, the sequence repeats with a different color scheme and a higher difficulty level. Later on, there are also invisible (black) levels (65–80). Each sequence of levels adds additional enemies that are faster and more deadly to the player’s ship. The numbered levels stop incrementing after level 99. However, a random one of the 16 variations will appear after each player death or the successful completion of subsequent levels.

The game is well known for its unusual triangular-shaped cabinet that is very pleasing to the eye. A less attractive cabaret and cocktail model were also produced. Read more about different versions: Arcade Museum

Tips and Tricks in the Tempest Video Game

– Continue playing until you destroy all aliens or until all the aliens reach the rim of your universe. If you have a Blaster, you advance to the next level of play.
– Players should work their way up through the levels to become familiar with game play. Drop down a level if play is too difficult.
– Experienced players should start at highest level possible for maximum points.
– On a new playfield shoot at enemy dots at far rim.
– Try to shoot aliens while they are still in the corridors of the cosmic tube. They pose a greater threat (and are harder to hit) once they reach the rim of your universe.
– Shoot a Flipper as soon as it starts to flip. Anticipate where they are heading and fire your Blaster in that direction.
– Once a Flipper reaches the rim, you can shoot it only by waiting for it to flip into initial contact with your Blaster. But you must fire before it takes the next step and flips on top of your Blaster.
– Tankers carry other aliens. To destroy their cargo, move your Blaster back and forth across adjacent corridors as you fire.
– Fuseballs spend most of their time along the edges of the corridors, out of firing range. To make sure you hit them, move your Blaster from one side of a corridor to the other while you fire. Once they reach the rim, you can only destroy them with your SuperZapper.
– Use long Spikes to reclaim shots and kill enemies approaching you from adjacent lanes.
– Avoid shooting Fuseball Tankers near the top since emerging fuseballs usually zip up to the top and kill you.
– When Pulsars contract into a zigzag bolt of lightning, quickly move your Blaster away from their corridor.
– Fire at Pulsars after they fire, but before they get ready to fire again. Pulsars and Fuseballs are like Flippers in their ability to switch corridors.
– Watch for corridors that are open along the rim. You can still move your Blaster over the gaps, but beware…there is a Pulsar inside.
– Don’t fire at missiles. They are dangerous and you don’t get points for destroying them.
– Avoid spikes. At the end of a level, position your Blaster over a corridor that is free from spikes. During higher levels of play, blast away at the Spikers and their spikes to keep a safe corridor for your next hyperspace passage. Remember, you can’t destroy them with just one shot.
– Use the SuperZapper right before last enemy reaches the top for a few extra points.