Magnavox Odyssey: is the first commercial home video game console. It was developed by a small team led by Ralph H. Baer at Sanders Associates and released by Magnavox in the United States in September 1972 and overseas the following year.

The Odyssey consists of a white, black, and brown box which connects to a television set, and two rectangular controllers attached by wires. It is capable of displaying three square dots on the screen in monochrome black and white, with differing behavior for the dots depending on the game played, and with no sound capabilities.

Players place plastic overlays on the screen to create visuals, and the one or two players for each game control their dots with the three knobs and one button on the controller in accordance with the rules given for the game. The Odyssey console came packaged with dice, paper money, and other board game paraphernalia to go along with the games, and a peripheral controller—the first video game light gun—was sold separately. 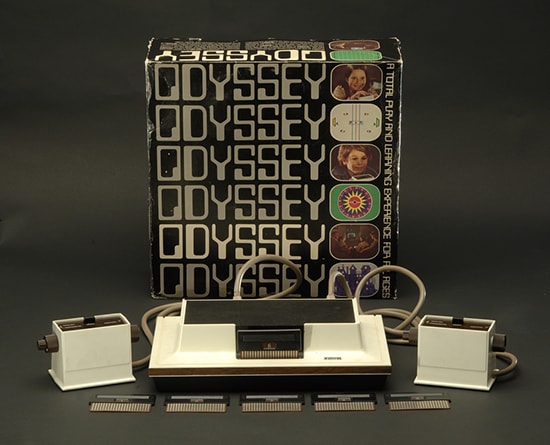 The idea for a video game console was thought up by Baer in August 1966, and over the next three years he, along with Bill Harrison and Bill Rusch, created seven successive prototype consoles. The seventh, known as the Brown Box, was shown to several manufacturers before Magnavox agreed to produce it in January 1971. After releasing the console in September 1972 through their dealerships, Magnavox sold between 69,000 and 100,000 units by the end of the year, and 350,000 by the time the console was discontinued in 1975.

In 1951, while working for military contractor Loral Electronics, engineer Ralph H. Baer was assigned to build a television set; while doing so, Baer claims he had the idea to build something into a television set that the owner could control, rather than only hooking it up to a remote television station. Baer did not pursue the idea, but it returned to him in August 1966 while waiting for a bus.

Baer, then the head of the Equipment Design Division at military contractor Sanders Associates, came up with the concept of using a television to play games, and the next morning wrote up a four-page proposal for a US$20 “game box” that would plug into a television screen and play games on it.

In the proposal, Baer began by referring to the project using military terminology, but by the time he finished it he was referring to it as Channel LP, short for “let’s play”. The proposed device would transmit a signal that the television set could tune into as if it were a television channel, and Baer described several games that could be played on it.

Unlike the joystick or modern controllers, the Player Control Unit was square and designed to sit on a flat surface. At the top sat a reset button with the control knobs placed on the sides, and an English Control (EC) node at the end of the right knob. The knobs controlled the vertical and horizontal movement of the “paddle”, while the EC adjusted the “ball.” To place the ball in the center of the screen, you turned the EC to the raised mark indicator.

The system was designed to accommodate two players. A multiplayer game was activated by pressing the reset button on the second Player Control Unit. 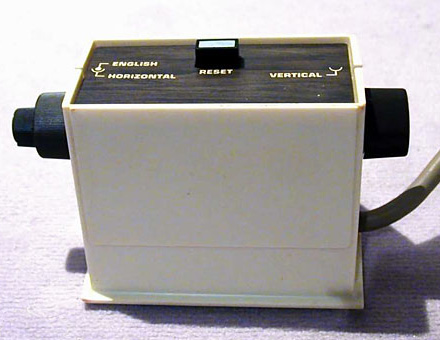