Arcadia 2001: is a second-generation 8-bit console released by Emerson Radio in May 1982, several months before the release of ColecoVision. It was discontinued only 18 months later, with a total of 35 games having been released. Emerson licensed the Arcadia 2001 to Bandai, which released it in Japan. Over 30 Arcadia 2001 clones exist. 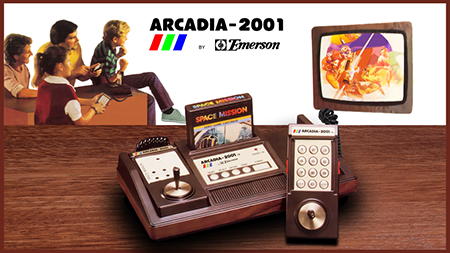 The Arcadia is much smaller than its contemporary competitors and is powered by a standard 12-volt power supply so it can be used in a boat or a vehicle. It also has two outputs (or inputs) headphone jacks on the back of the unit, on the far left and far right sides.

The system came with two Intellivision-style controllers with a 12-button keypad and ‘fire’ buttons on the sides. The direction pads have a removable joystick attachment. Most games came with BoPET overlays that could be applied to the controller’s keypads.

The console itself had five buttons: power, start, reset, option, and select. 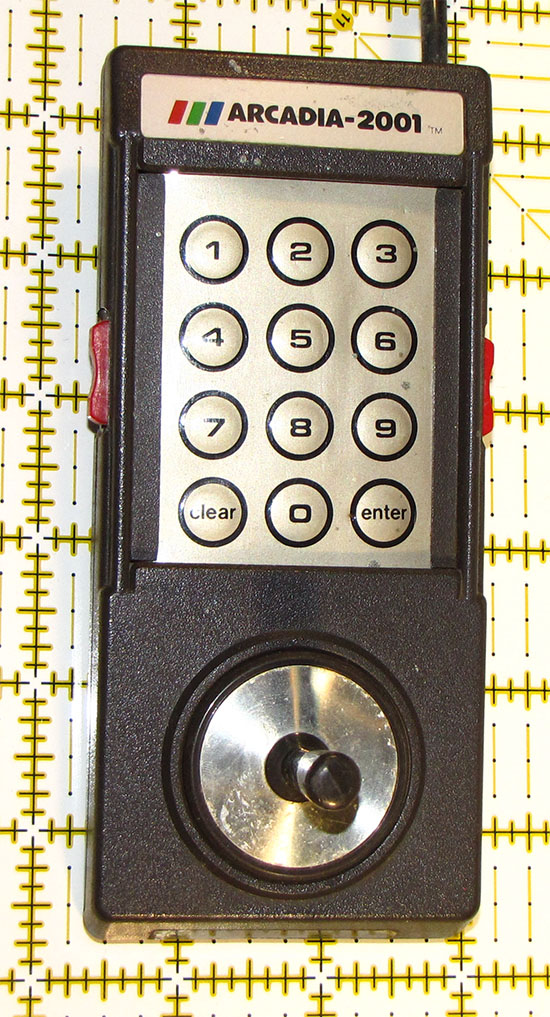 Emerson planned to launch the console with 19 games. Some Arcadia 2001 games are ports of lesser-known arcade games such as Route 16, Jungler, and Jump Bug, which were not available on other home systems.

Emerson actually created many popular arcade titles including Pac-Man, Galaxian and Defender for the Arcadia, but never had them manufactured as Atari started to sue its competitor companies for releasing games to which it had exclusive-rights agreements.

Early marketing showed popular arcade games, but they were later released as clones. For instance, the Arcadia 2001 game Space Raiders is a clone of Defender, and Breakaway is a clone of Breakout.