Retro Console, also known as Classic, Vintage or Old School Console, is a retro gaming device to play retro video games from the days past. In addition, retro gaming devices can also be retro home computers and retro arcade video game machines. Retro gaming itself is based upon systems that are obsolete or discontinued. Devices can be divided into generations. 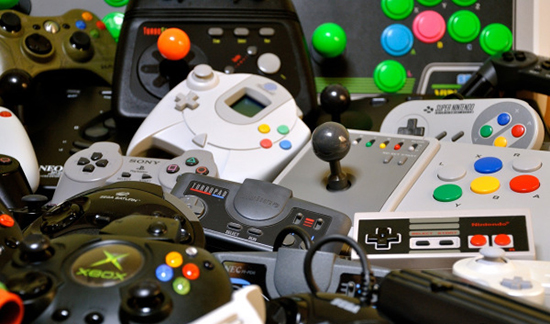 Retro gaming usually involves around playing retro video games, produced from the early 1970-s to late 2000-s. Or in other words, it can include playing video games on, or released for the 1st to 6th generation of video game devices. Read more about console generations

Retro gaming has existed since the early years of the video game industry, but was popularized with the popularity of the internet and emulation technology. It is argued that the main reasons players are drawn to retro games are nostalgia for different eras, the idea that older games can be more challenging, and the simplicity of the games that requires less hours of game play.

Emulated retro gaming involves newer systems simulating old gaming systems. This way you can bypass the need to collect old consoles and original games. ROMS – read only memory files, are taken directly from the original cartridge or disc from third parties. They are then typically put online through file sharing sites and played via emulators on modern hardware.

Ported retro gaming allows games to be played on modern hardware via ports or compilations. It’s different from emulation because the games are being rewritten for the new system and don’t use the original ROM files.

Additionally, the term retro gaming could apply to a newer game, but with features similar to those of older games, such as an “retro RPG” which features turn-based combat and an isometric camera perspective. Or modern games with simple old school pixel graphics and so on. Source

There are different types of retro gaming movements. Most generally, retro gaming can be categorized by the way of playing the games:

Modern retro console is a device that was built after obsolete or discontinued gaming system and it’s purpose is to emulate, or to be able to read and play original vintage media (cassettes, discs, floppies or any other format necessary) to play video games from the past.

Here are few of the modern retro gaming devices released:

All these consoles above are emulation based, however there are also some high quality hardware based retro consoles available by Analogue: