Please scroll down to vote for your favorite video games of 1989. Thanks! 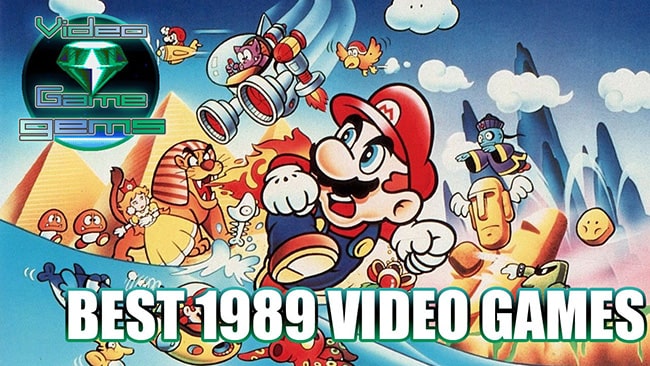 Game of the Year at the Golden Joystick Awards is won by Operation Wolf (8-bit) and Speedball (16-bit).

Sega releases Phantasy Star II, a landmark title for the role-playing video game genre. Nintendo releases Super Mario Land on the Game Boy. It was the first to introduce Princess Daisy to the Mario series. Konami releases Teenage Mutant Ninja Turtles for NES, one of the first video games based on the 1987 Teenage Mutant Ninja Turtles animated series. It was released after the show’s second season. Bullfrog releases Populous, one of the first commercially successful god games.

Capcom releases DuckTales for NES based on the Disney animated TV series of the same name. Brøderbund releases Prince of Persia for the declining Apple II, having been in development since 1985. However, ports to other systems turn the game into a hit. Maxis releases Will Wright’s Sim City, the first of the “Sim” games and a revolutionary real-time software toy.

Other Console Games of 1989

Hudson Soft releases Bonk’s Adventure, introducing the TurboGrafx-16 mascot and starting the Bonk franchise. Techno Soft releases Herzog Zwei for the Mega Drive in Japan. Herzog Zwei is important for laying the foundations for the real-time strategy genre. Konami releases Castlevania III: Dracula’s Curse. It was the third and final game from series for NES. Wes Cherry writes Solitaire and Robert Donner writes Minesweeper, which are bundled with Microsoft Windows starting from version 3.

Psygnosis releases difficult platformer Shadow of the Beast, demonstrating the capabilities of the Amiga and helping sales of the computer. Sega releases Wonder Boy III: The Dragon’s Trap.

How PC-Engine / Turbografx 16 was born?

Hudson Soft wanted more graphical power to it’s games but Nintendo wasn’t interested. Hudson went to NEC and PC-Engine (JP) / TurboGrafx16 (US) was born. It was extremely successful in Japan where it immediately outsold Famicom but sucked outside of Japan due to horrible marketing strategy. Lots of good games were never released outside of Japan.

Jesus: Tale of the Dreadful Bio-Monster

Lord of the Sword

Astaroth: The Angel of Death

Joan of Arc: Siege & the Sword

A Nightmare on Elm Street

A Nightmare on Elm Street

Shadow of the Beast

It Came from the Desert