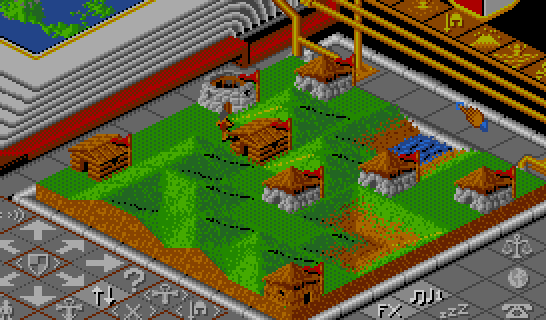 Game description
Populous is a video game developed by Bullfrog Productions and published by Electronic Arts, released originally for the Amiga in 1989, and is regarded by many as the first god game. With over four million copies sold, Populous is one of the best-selling PC games of all time.

The player assumes the role of a deity, who must lead followers through direction, manipulation, and divine intervention, with the goal of eliminating the followers led by the opposite deity.

Gameplay
The main action window in Populous is viewed from an isometric perspective, and it is set in a “tabletop” on which are set the command icons, the world map and a slider bar that measures the level of the player’s divine power or “mana”.

The game consists of 500 levels, and each level represents an area of land on which live the player’s followers and the enemy followers. In order to progress to the next level the player must increase the number of his followers such that they can wipe out the enemy followers. This is done by using a series of divine powers. There are a number of different landscapes the world (depicted on the page in the book) can be, such as desert, rock and lava, snow and ice, etc. and the type of landscape is not merely aesthetic: it affects the development of the player’s and enemy’s followers.

Review:
Volcanoes are fun; damage is repaired by razing the area to sea level and then rebuilding it. Total enjoyment, were it not for the fact that the opposition is doing the same to you. Once one world has been won to your cause the next one in your campaign will be more difficult, with harsher terrain and a more intelligent enemy. Apart from the enormous flexibility of the game options – you can even make your opposite number very stupid – the really smart feature of Populous is its computers feature. Usually the game is single player but with the addition of a modem two can compete. More sociable types can use a null-modem RS232 lead and talk to someone at a closer range. High baud rates increase the speed of movement, and all versions of Populous use the same protocol, so Amigos can talk to STs.

The graphics are neatly isometric and the sound is suitably big for a game about supreme beings. What could really be done without is the flashing of the power LED on the Amiga casing in time to your heartbeat. Nervous types may assume a crash. If the world’s getting too much for you, build your own with Populous. It’ll take you more than six days, and you won’t want to rest until you’re finished.

Or that’s how it was! Even fond memories of the 1989 original can’t disguise the fact that Populous isn’t relevant or fun almost 30 years later.