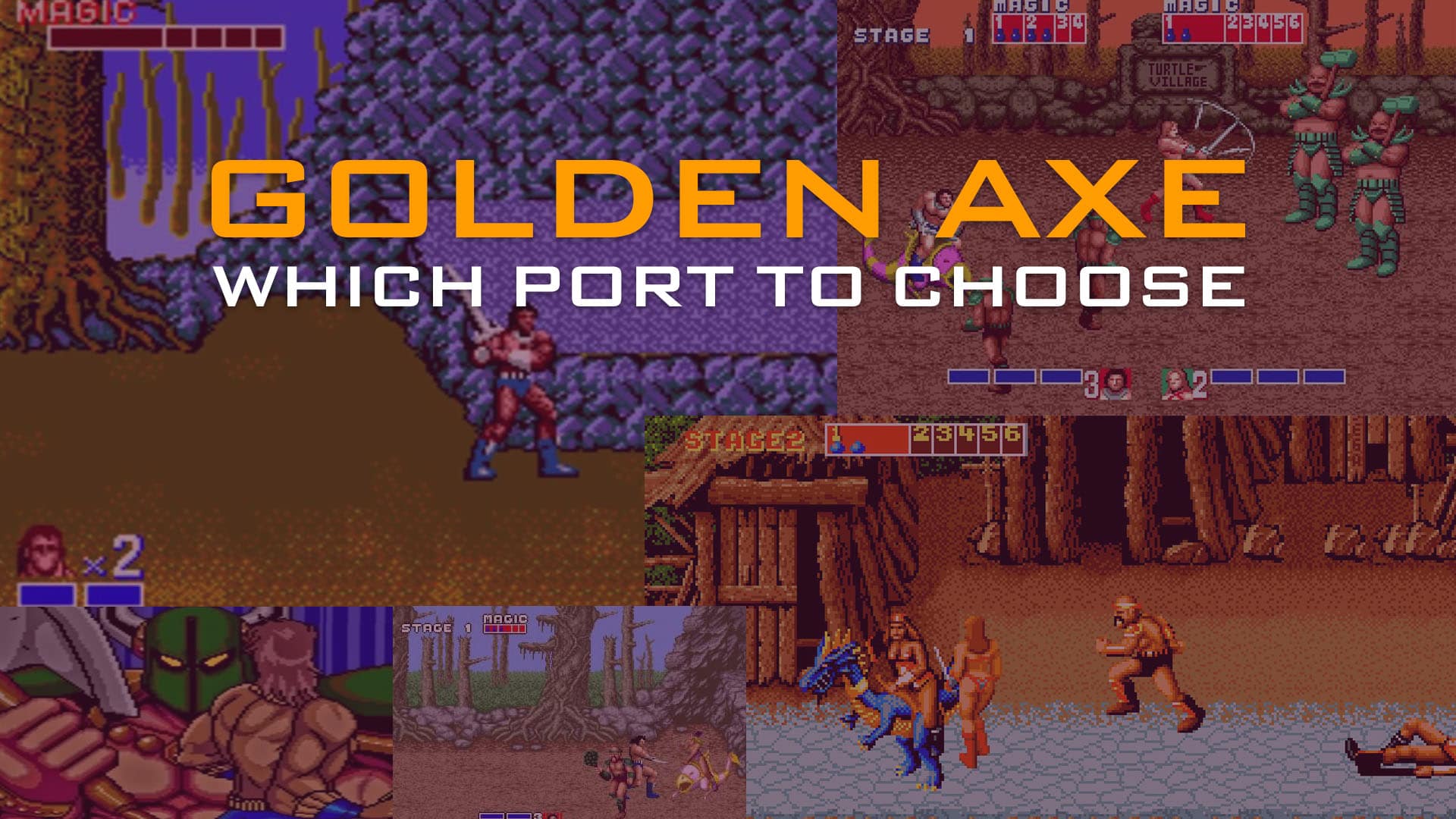 Golden Axe is an arcade beat-’em-up game first released in 1989 on the Arcades. In 1990, Golden Axe was ported to various platforms. In this post (below) I will take a closer look at the home ports released in 1990!

Scroll down to the “which port to choose” section >>

Golden Axe takes place in the fictional land of Yuria, a Conan the Barbarian-style high fantasy medieval world. An evil entity known as Death Adder has captured the King and his daughter, and holds them captive in their castle. He also finds the Golden Axe, the magical emblem of Yuria, and threatens to destroy both the axe and the royal family unless the people of Yuria accept him as their ruler.

Three warriors set out on a quest to rescue Yuria and avenge their losses at the hands of Death Adder. The first is a battle axe-wielding dwarf, Gilius Thunderhead, from the mines of Wolud, whose twin brother was killed by the soldiers of Death Adder. Another is a male barbarian, Ax Battler, wielding a two-handed broadsword, looking for revenge for the murder of his mother. The last is a longsword-wielding amazon, Tyris Flare, whose parents were both killed by Death Adder.

Players are able to attack using their weapon, jump and cast spells that hurt all enemies on the screen. The force of this magic depends on the number of “bars” of magic power currently available. The bars are filled by collecting blue “magic potions” attained by kicking little sprites who then drop the potions. These sprites appear during regular levels and during bonus stages in between levels.

The male warrior Ax is able to cast earth spells. The dwarf Gilius casts lightning spells and the female warrior Tyris casts fire magic. Each character has a different number of maximum magic bars and varying ranges of attack.

Progress is made through the game by fighting through Death Adder’s henchmen, including men armed with clubs and maces, skeleton warriors, and knights.

If the players take too long to advance, skeleton swordsman emerge from the ground, like in Jason and the Argonauts.

Steeds you can ride in the game

Various steeds known as bizarrians are found in the game. These can be ridden when the enemy rider is knocked off, or if one is found dormant. The least powerful steed is known as the Cockatrice (which also appeared in Altered Beast), which can be used to knock down enemies with a swipe of its tail.

The more powerful dragon, which can either shoot fireballs or breathe fire depending on its color scheme, is found later in the game.

Golden Axe is an arcade beat-’em-up game that puts players in the shoes of one of three heroes, each with his own reason for trying to overthrow the evil rule of Death-Adder. It is a horizontal fighting game, where you coal is basically to bash everything which stands between you and Death Adder himself. 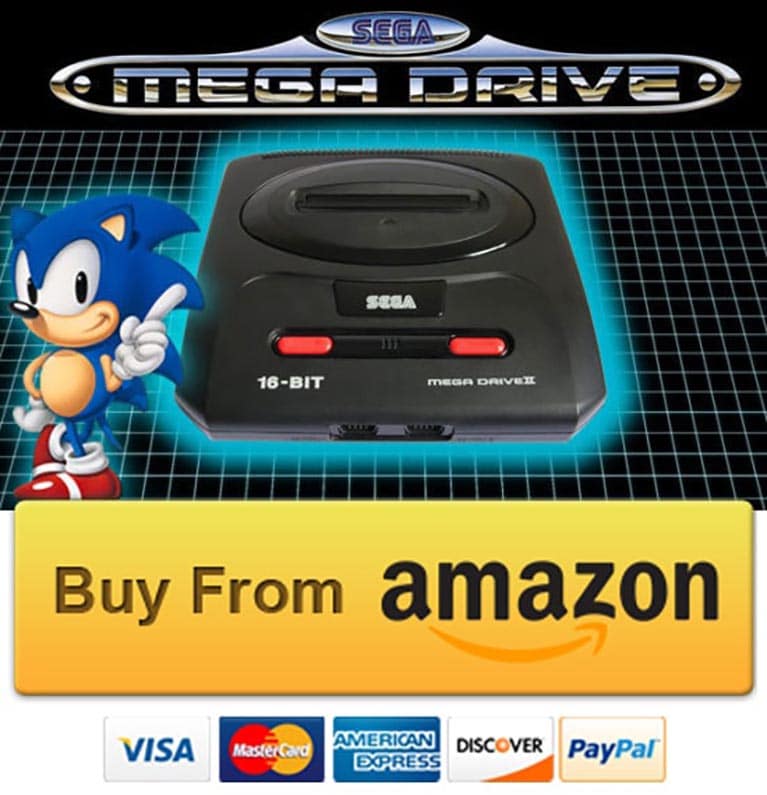 Level Select: Select Arcade Mode and press Down-Left to start the characters spinning, then press B + Start at the same time. A number will appear in the top left hand corner. Use Up and Down to choose a level, then select your character and start the game.

9 continues: Enter the Options screen and select Arcade Mode. Now hold Down-Left on Controller One. The characters should spin continuously. As you do this, press A + C. Release all the buttons and press Start.

Level Select: At the character select screen, press a number key on the top row (not the number pad) between 1 and 8, then press Enter. Select your character, and you will begin on that selected stage. In The Duel this will take you to the round with that number. Note that even though The Duel has 15 rounds, the cheat only works up to round 8. In Beginner mode, you can select stage 1-3. Any number higher will take you straight to the ending credits.

Play as enemies: Some abandonware sites distribute a cracked version known as “Super Golden Axe”. This version includes a batch file that allows you to play as various enemies. This trick works with any MS-DOS version, however.

Continue Game: When you reach a Game Over hold I and II and press RUN to continue playing.

Extra life: Begin a single player game with two joysticks plugged in. After losing a life press Fire on joystick two to get three additional lives.

Extra lives: At the Game Over screen hold UP + LEFT + 1

Rediscover your favourite 80s videogames in HD! Each title for the Nintendo Classic Mini: Nintendo Entertainment System is displayed at a smooth 60Hz via the included HDMI cable and can be enjoyed in one of three visual modes! 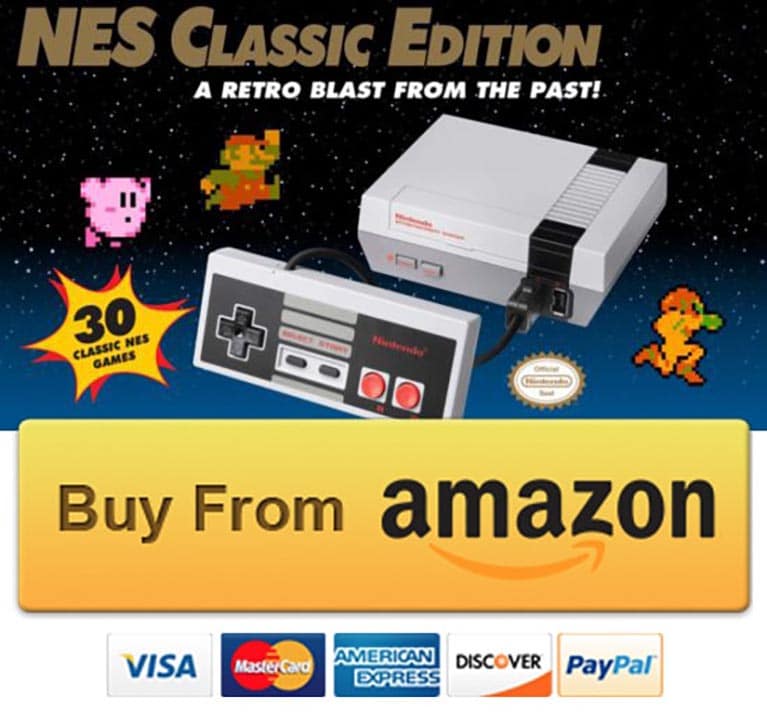 Which port to choose?

In 1990, Golden Axe was ported to various platforms. I decided to take the challenge and try them all. So what did I learn? Which one is the best?

Please note! In this list I left out the original and concentrated on home ports!

PC version is not the worst you can choose!

Graphics are quite okay for the time (VGA), audio quality on the other hand is horrible. Game itself plays relatively well (except when you are getting repeatedly kicked into unconsciousness less than a second after getting up and there is nothing you can do about it), is quite responsive and runs smoothly.

Problems start when you need to jump over the wider pits, it could be a nightmare. Button mapping could be a lot better, somehow I always keep pressing shift accidentally to waste my special attack. It doesn’t help when you change it to Keyboard (attack button in the middle of direction keys doesn’t make sense) or Joystick (Character suddenly forgets how to walk and is only running).

In addition, levels are a bit too short – There are entire sections of land missing. Power-ups get stuck in the wall and the game doesn’t let you further until they are gone. It also lacks many animations and small details compared to the original (Arcade).

Animations and sounds are awesome on Amiga.

Amiga version is missing 2 extra stages beyond the destruction of Death=Adder (as seen in the Mega Drive, PC and arcade versions). Unfortunately it has too many slowdowns in the game that ruin the game flow – it has loading screens and slowdowns start when multiple enemies get on the screen. Also, the Amiga version pauses sometimes to load sections of the level.

But one thing I hate most about this game is the control system – It’s even worse than the PC version were the mapping is bad. Here you need to use only one action button in combination with directions. This makes you make many mistakes and wrong moves during the game. That is irritating.

Graphically it is different from the PC version. Characters are smoother but smaller (and a bit cartoonish), at some points the game looks weird and some point (character select screen) it looks even bad – Maybe it is the color palette used there?

Overall experience – Didn’t like it because of the controls and slowdowns.

As you can imagine – from the audio department and especially graphically of course, it doesn’t give any competition to the computer counterparts.  However, the game is lightning fast compared to the previous ports! And damn, it is so much fun!

Animations are poor, and it looks a bit clunky but the controls are responsive. Buttons are exactly where they need to be. Only the collision detection is poor with the sword not connecting with the other sprites a lot of the time. But it doesn’t bother that much because in real life – would you hit every time?

It is also missing 2 extra stages beyond the destruction of Death=Adder.

Overall experience – You can call me crazy but I liked it way more than PC and Amiga versions. Why? Because it is fast-paced and easy to control. Also, this 8-bit audio sounds damn good to me! Good entertainment!

Forget everything I told about 3 other ports! This version destroys them all in all possible ways – Graphics, Animations, Hit detection, Game Speed.

Also, Genesis version is not missing the extra stages beyond the destruction of Death=Adder – which is a good thing.

Don’t know what else to say – This is the clear winner!

Biggest disappointment of all.

Starts with stunning intros and CD quality audio, but as you will get to the character select screen you start seeing problems.

They changed the character select screen into boring 2d.

So once you have watched the intro, you could turn off the game!

The game is Japanese only (in Japanese language) – however, you can watch translated playthrough from the video below!

So that’s it – thanks for reading! If you have suggestions, leave them in the comment section below! You can also take a look at the other games of 1990!

Nintendo SNES Mini has the same look and feel of the original system only smaller and comes pre-loaded with 21 games. Step back into the 90s and re-experience some timeless classics! 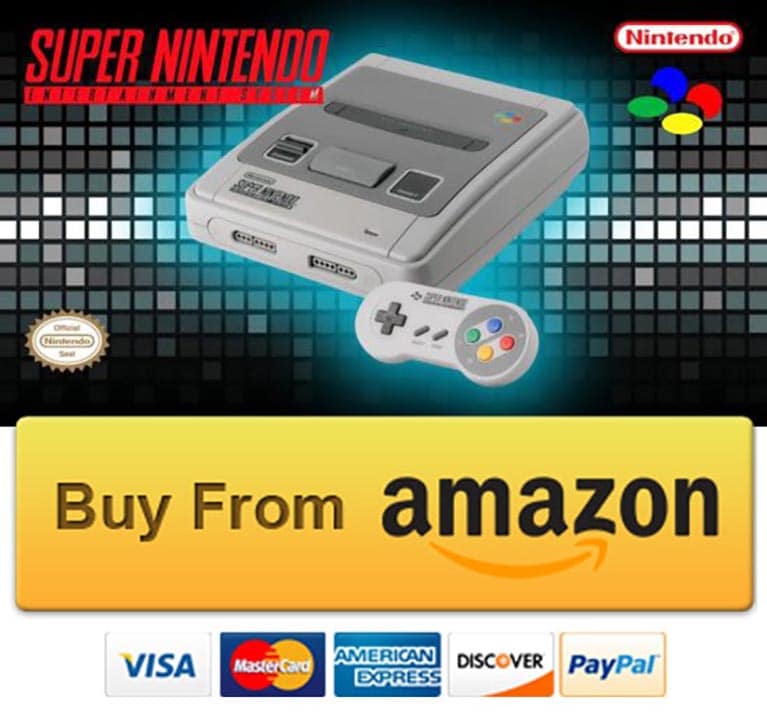 If you liked the post – you can support me doing what I am doing! Thanks!

Buy Me A Coffee